by Christina Connor, Assessment and Instruction Librarian and Coordinator of the American History Textbook Project.

For my original project, I had planned to construct a virtual map of materials within Ramapo College’s American History Textbook Project (AHTP). Many students are often interested in researching if the region where a textbook is used or published impacts the coverage of certain topics within the materials. Working with a student in Fall 2019, I began cataloging any identifying information — such as publication information, school name, library stamp, and/or student name. This cataloging continued until the pandemic forced Ramapo’s closure mid-March, making the majority of the 300+ collection materials inaccessible for the Spring 2020 semester.

In order to still support students during this time, I brought home about 20 or so books from the AHTP Collection just in case a student needed access to a topic for an outstanding class assignment. Because of this, I was able to pilot a small Digital Humanities project/assignment for an upper level high school American history course similar to what I want to develop for Ramapo students.

Entitled The Changing History of John Fitzgerald Kennedy, the assignment posed a central question to the students: Why does our understanding of history change over time? The students were asked to watch a 10-minute streaming video on the 50th anniversary of Kennedy’s assassination, read a short article on the changing historical interpretation of JFK’s presidency, and review digital excerpts from four American history textbook published in different eras and from different historians. These textbook excerpts came from the materials I had available to me from the AHTP collection. The students answered a series of questions and created visual representations (such as Venn diagrams) of the differences and/or similarities from the excerpts using Google Docs. The pilot seemed successful and the teacher felt the students were very engaged in both their assignment responses and class discussion. The pilot will help to develop the DH project at Ramapo, and in future, I hope to use more sophisticated annotation and visualization tools. 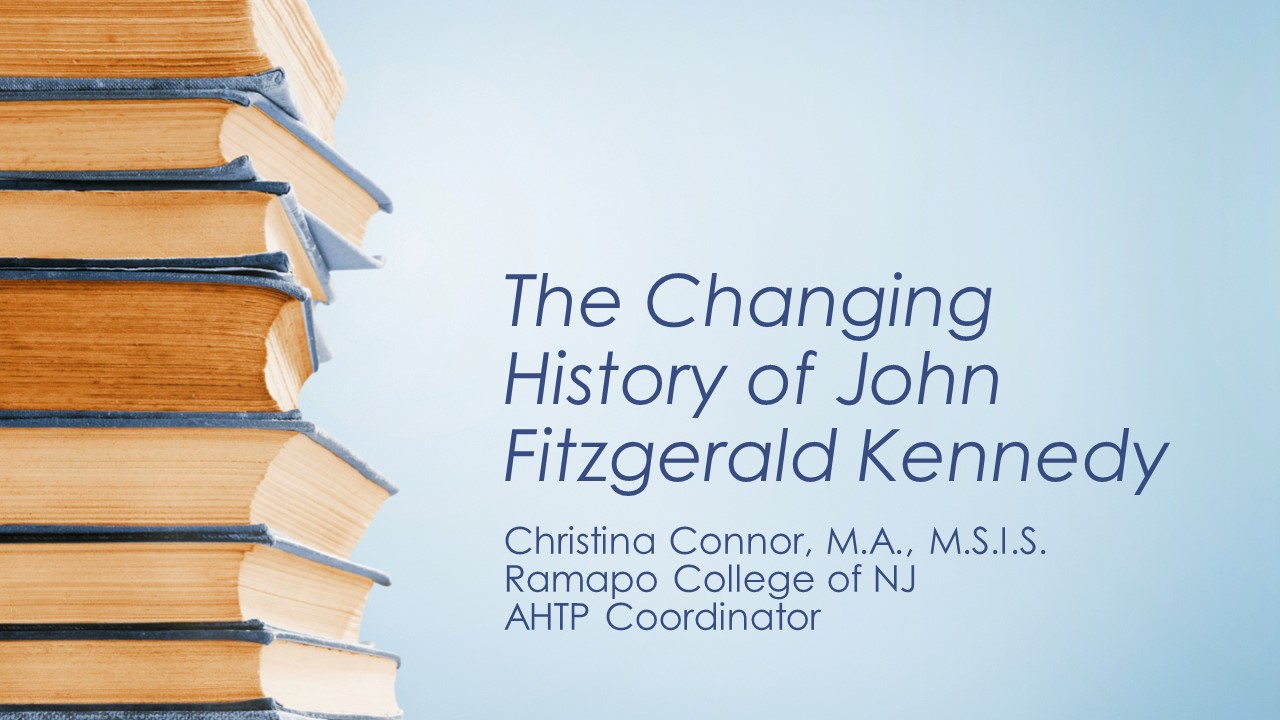 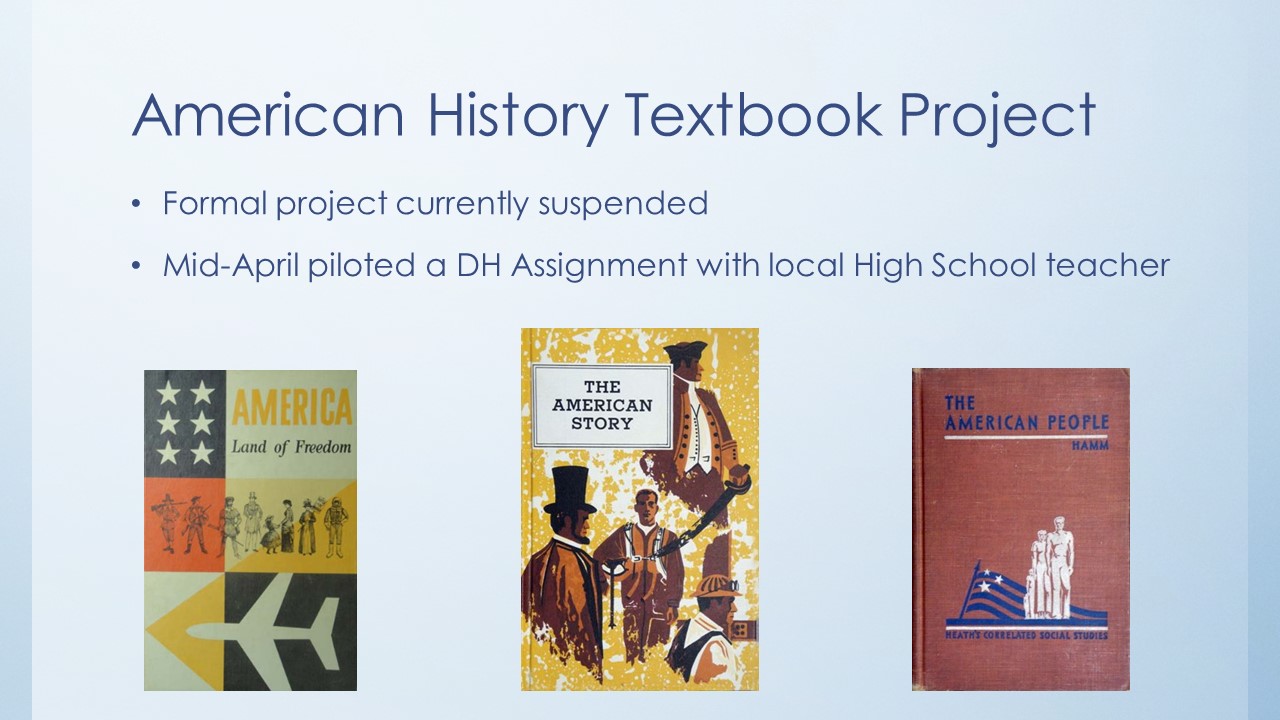 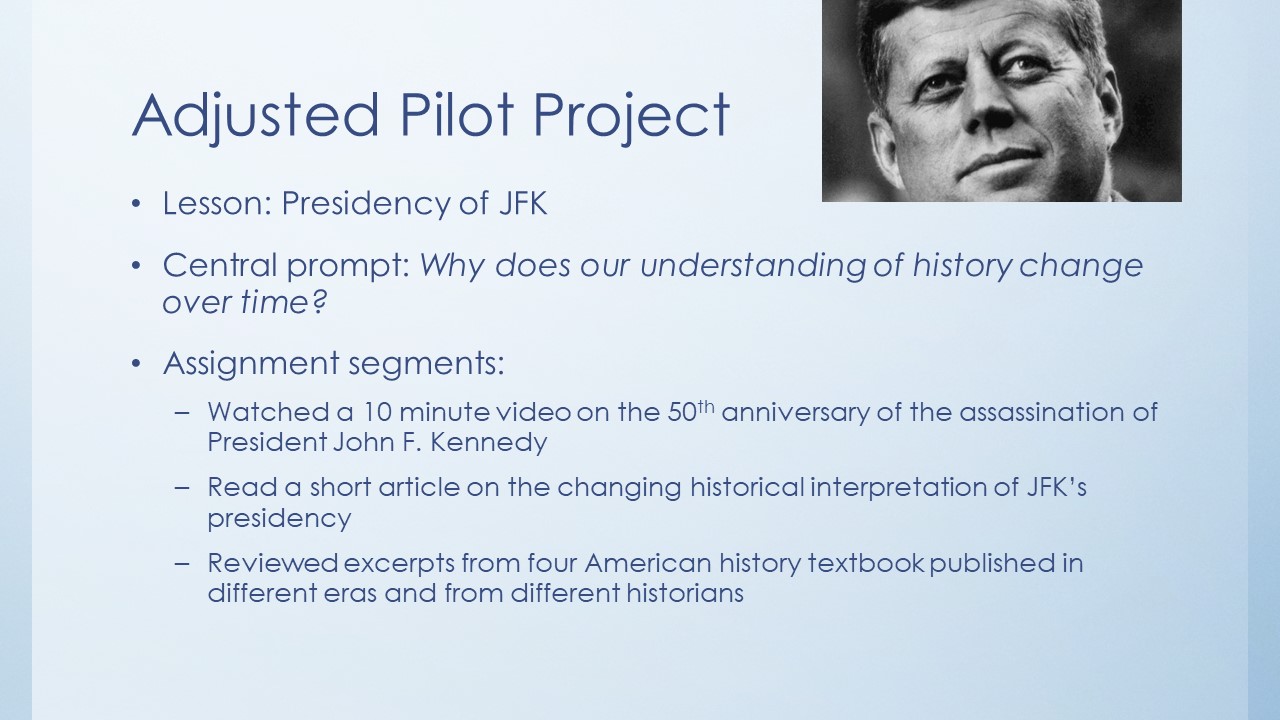 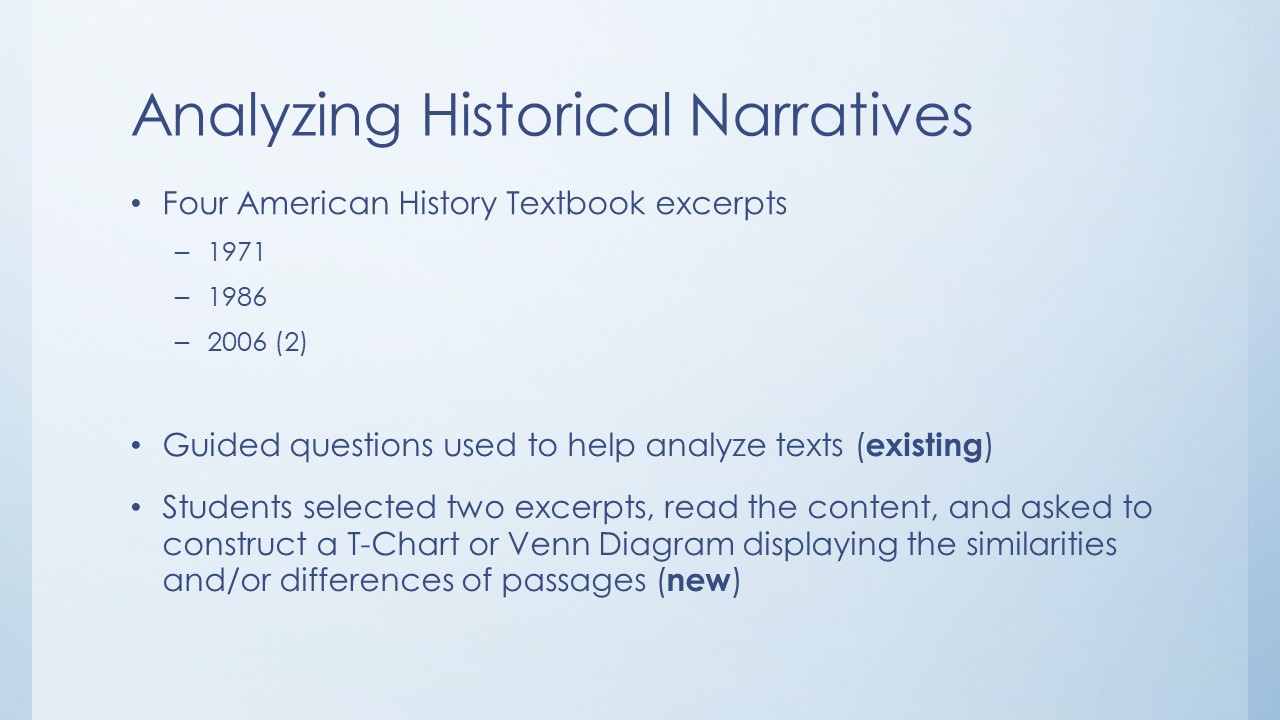 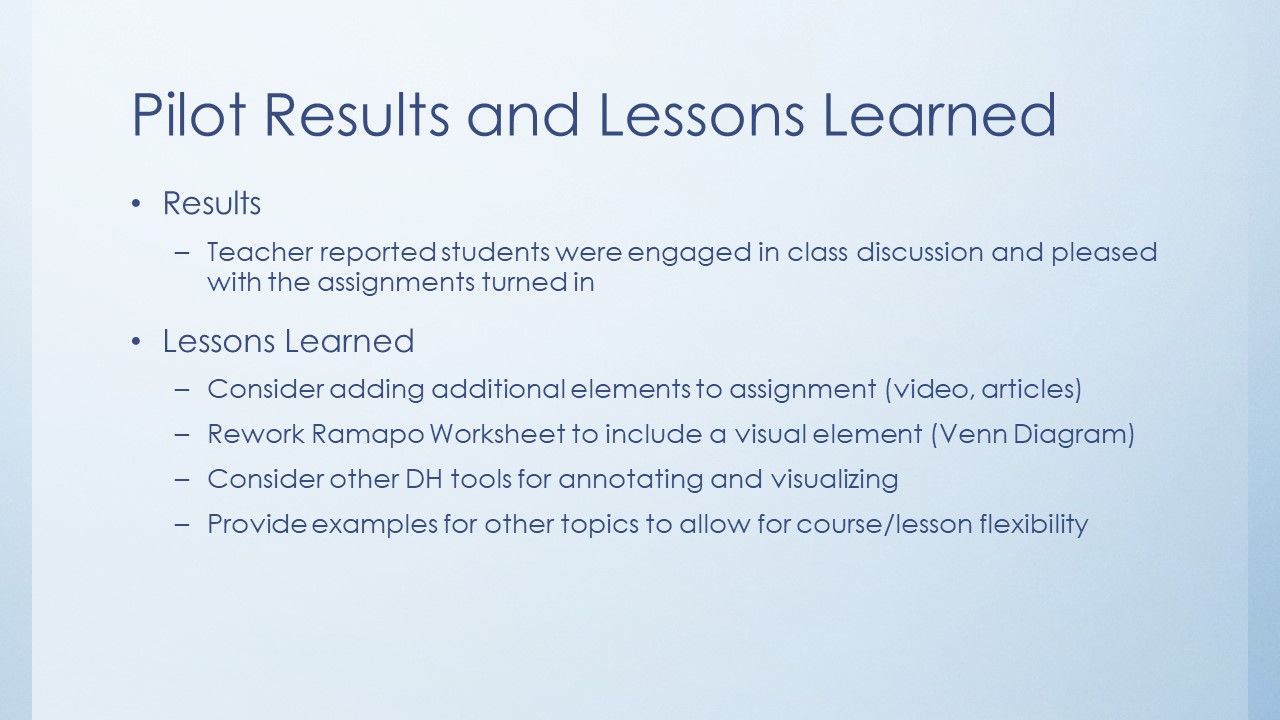 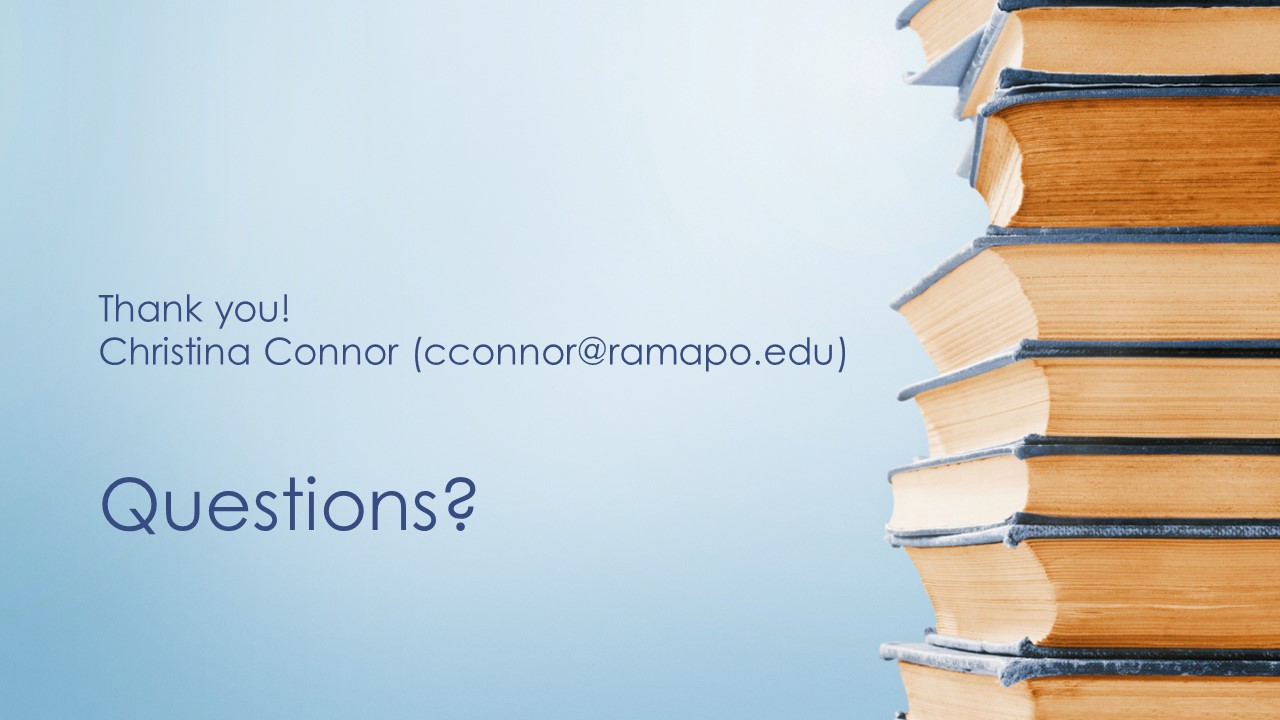 Essential Question: Why does our understanding of history change over time?

John Fitzgerald Kennedy, the youngest man ever elected President of the United States, served from 1961 to 1963. Leading at the height of the Cold War, his short presidency coincided with some of the most tumultuous events in American history — the Bay of Pigs invasion, the Cuban Missile Crisis, the construction of the Berlin Wall, the Civil Rights Movement, and the beginnings of the Vietnam War. His life and time in office were cut short by an assassin’s bullet on November 22, 1963. With such an abrupt and tragic demise, Americans were left with little time to properly assess Kennedy’s legacy in the immediate aftermath of his assassination. This has left later generations to look back and reevaluate Kennedy, and separate the unfulfilled promise of his presidency from the reality of his ideals, policies, and decisions.

I am encouraging you to virtually collaborate with one or two other people on this assignment.

Activity 1: Watch this video produced on the 50th anniversary of his assassination. (10 min.)

● What stood out to you about Kennedy’s presidency and his legacy as a leader? Based upon what you know about the time in which he served, the challenges he faced, and the decisions he made, how would you rate his presidency?

● Why do you think the official narrative or interpretation of Kennedy’s presidency has evolved over time? What are some specific factors that may contribute to this reinterpretation of history

Activity 3: The four links below are American history textbook excerpts from different eras and authors. Choose two textbooks from the selection below. They are listed by year of publication; select from different decades. Please note some of them are incomplete sections on Kennedy, and don’t provide all the information in the text, so they may not read coherently from page to page. You do NOT need to read all of the text in each excerpt, just pull out some examples to support your analysis. (40 min.)

● As you analyze the text, complete a compare/contrast graphic organizer (such as a T-Chart or Venn Diagram).

The analysis you put in your graphic organizer should relate the following questions:

Write all of your work in a Google Doc and submit to Schoology as a PDF.

Be prepared to discuss the three activities above when we next meet on ZOOM! I would also like to know your thoughts on how changes in historical interpretation and memory (like with JFK) affect us as a nation.

Special thanks extended to Mr. Daniel Willever, teacher of Social Studies at Ramsey High School in NJ, who collaborated with me on the creation of the JFK assignment for his US History II classes.

If you would like to use this assignment, please contact Christina Connor for copies of text book materials.